It was a surprise, the sudden gift of a spreading sky and a one-bedroom bolthole named after a pelagic seabird. Home, at last.

As a lifelong nomad, I have often wondered what defines our elusive sense of belonging? My debut novel, Bone Lines, features a marathon journey during which the protagonist seeks refuge, far from her native terrain. She is in essence an exile, forcibly estranged from the familiar.

Often it is only in retrospect that a writer realises her characters have emerged not purely from imagination, or hours of research, or the initial inspiration for the story, but rather from something more profound and personal.

And it is only now, having spent much of my own life looking for ‘home’ (and having found it, most unexpectedly, at the far western edge of Cornwall) that I can acknowledge the source of much of my character’s restlessness.

It is hard to describe the overwhelming relief I experienced when I finally encountered a sense of rootedness – not as much to a society or a culture, as to a place, to its very rocks, to its ancient and unknowable history.

Soon after claiming the keys that unlocked a new life for me, I was moved to tears of joy on a lonely stroll along the cliffs then down to the beach, wrapped up against the winter wind. Forged in the heat of Hong Kong and the West Indies, I’ve never cared much for the cold, but somehow the vitality of the Cornish sea air blew through me like a ghost re-inhabiting its long lost form.

Humans have always been nomadic. We have walked around every part of the planet, and lately we have filled its skies with jet-fuel and its oceans with cargo in search of whatever calls to us. Adventure and discovery are hardwired into our hopes, even if very few earth-bound frontiers remain to be found.

Many of us can stay put quite happily, unpack our baggage, settle down. A few of us perhaps too aggressively associate our identity with a small patch of flag, or a strip of territory. But that sense of groundedness, of drawing nourishment for body and soul from the earth beneath us, is a gift so many of us have misplaced, either through ‘rented’ lifestyles or more insidious forms of alienation.

Various studies tell us how divorced we ‘ve become from nature, how disconnected, and how dangerous this is. But this is not so much a meditation on that bigger picture, not right now. It takes a tighter focus on what it means, for me, to have arrived. To be able to stop looking for wherever the rainbow has landed, somewhere over there, somewhere in the distance.

That reference may seem a little cheesy, but human nature doesn’t much care for our notions of cool, and I am taking no poetic licence when I tell you that as I drove up to the place where they will bury my heart, there was indeed a rainbow landing right over it. Yes, really. I have the picture to prove it… 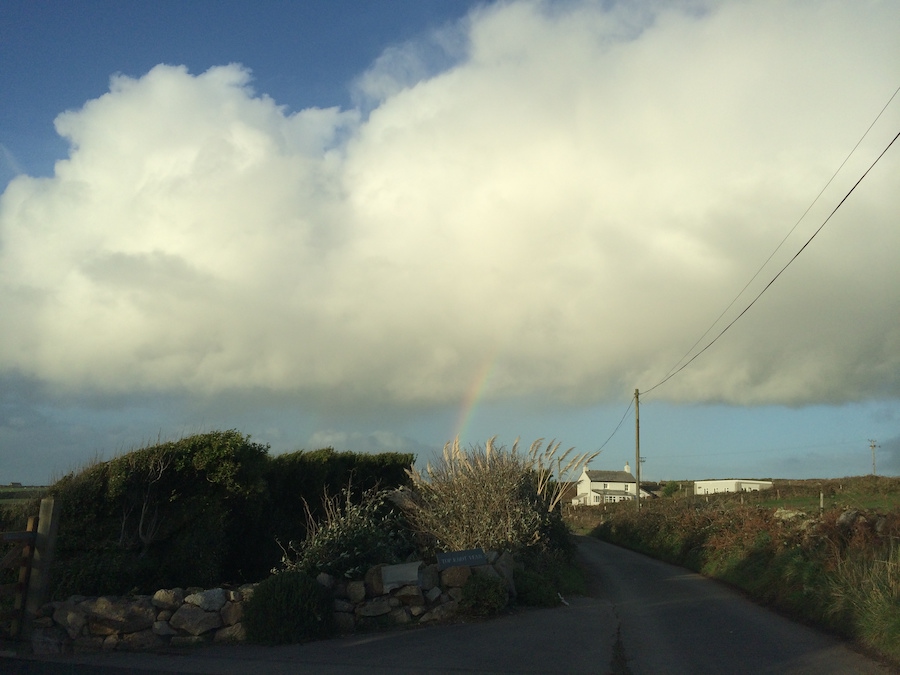 Since feeling both the privilege and the blessing of being able to call a tiny patch of this extraordinary location my own (although, of course, we only ever ‘borrow’ any bit of the planet) I have discovered so much more that grounds me here. 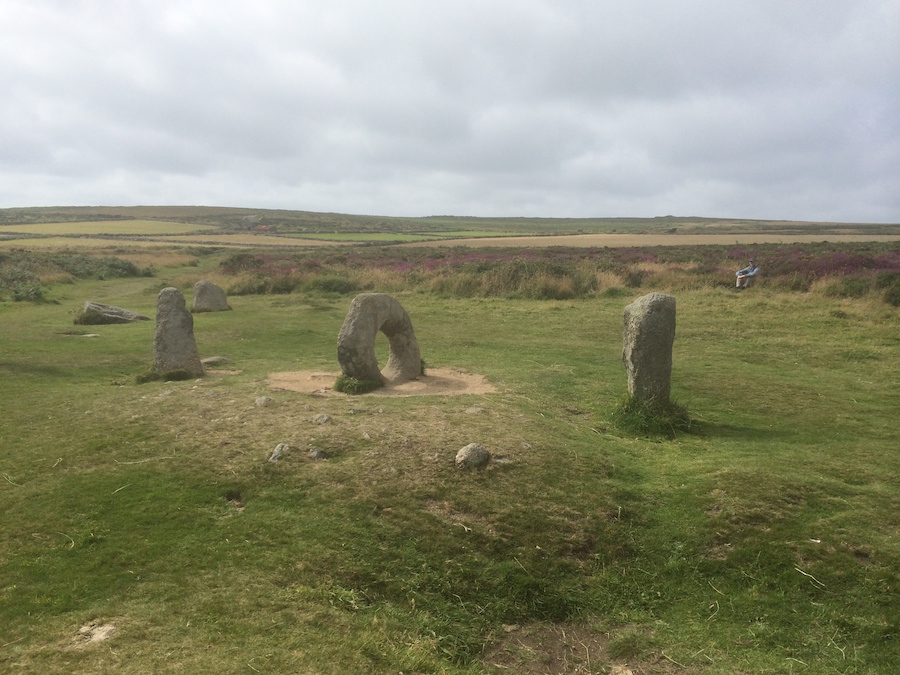 Stone circles, mesolithic villages, hikes along pathways worn by millennia of feet, carved out by the first migrants here (homo Erectus probably, or some other species we Sapiens have long since replaced). Whispering valleys that seem untouched by the centuries, bar a few useful if invasive telegraph poles. And one such walk has become the inspiration for copious note taking and a stream of ideas for a new novel set hereabouts.

The landscape around me sings to my very cells, as if to my DNA, though I have no Cornish forebears of record (rather a generous serving of Scouse, a hefty wedge of Celtic and a slice of Viking, according to my Ancestry DNA pie.)

This sense of ‘homecoming’ remains a mystery for now, but what is clear (if not the cause) is the effect. It seems the discovery of somewhere so ideal to hang my wandering spirit has in turn freed up the energy and the courage to return to my passions.

This one-bed in a converted grain barn was where I finished my first book, uploaded the manuscript to my hoped-for publisher, Unbound, drew a deep breath and clicked ‘enter.’ (Thankfully, they accepted, and I exhaled.) Here, I began the follow up book (first draft almost done) and composed a few short stories, one of them recently published in an anthology.

Here is where only a serious storm (ok, maybe some persistent, windblown mizzle or a saturating sea fog) will hold me back from my daily walk and communion with ever-changing natural conditions.

Perhaps unsurprisingly, it is for this sense of sanctuary that my characters in Bone Lines also yearn. Indeed, many of my stories are peopled by the outsider or the loner, the restless native or the seeking soul, whether they belong to prehistory, closer history (the new project) or contemporary times.

And I, too, hope for such homecomings for my fictional companions, whether on or off the page. May they find, or recognise a hearth for their hopes and desires, or whatever new dreams they may choose, as they relinquish the old. Somewhere, either physical or spiritual, to lay down their burdens awhile. 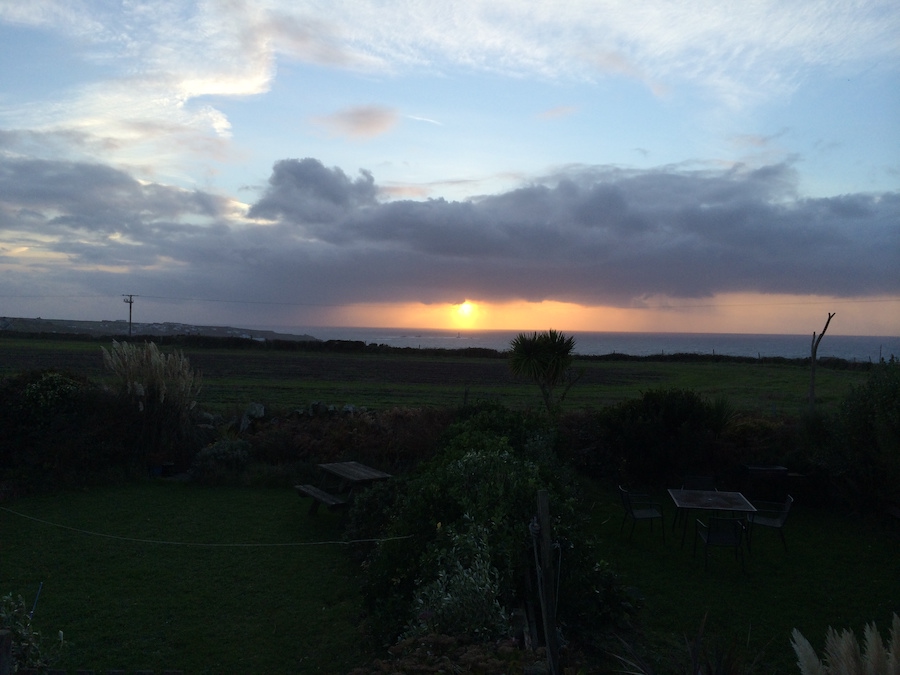 But here, now, from the boundless perspectives of my wild Cornish clifftop, the sun is setting over the wide Atlantic, dusting the waves with luminous gold before the Longships lighthouse takes over its watch. And a light has been switched on somewhere else, deep within, welcoming me back to somewhere I didn’t know I had missed.

And all subscribers will receive news, blog updates and subscriber-only specials. So please sign up. It only takes a couple of clicks and you can unsubscribe at any time…